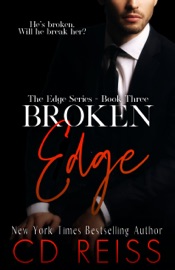 Their love was born in the fires of war, and into war they return.
Caden is called back to Baghdad as a trauma surgeon. Left to her own devices, Greyson hunts the last, mysterious clues to Blackthorne Solutions-the company that administered her husband's treatment.

The trail dries up. In order to saves the man she loves, she has to accept a job from Blackthorne and—against Caden's wishes—follow him to Iraq.

Now in the belly of the beast, she learns all too well what Caden went through, and she learns how to remedy what was done to him.
But will he accept the treatment?
And will she still love him when he's whole?
--------
The Edge
Rough Edge
On the Edge
Broken Edge
Over the Edge