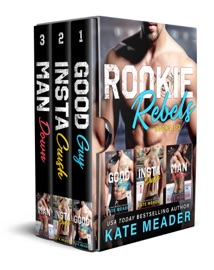 A spin-off series from Kate Meader's bestselling Chicago Rebels hockey romances, the Rookie Rebels feature heroes who are “rookies” but not in the way you think. No green, fresh-out-of-college man babies here! These are weathered guys who’ve had their NHL careers put on hold for reasons such as military service, life-threatening injury, or unspeakable tragedy. Their second acts and roads to redemption will be with everyone’s favorite hockey team, the Chicago Rebels!

Book 2: Instacrush (Theo and Elle)
Her hot hockey player neighbor is the most annoying man on the planet ... and she does not have a crush on him (okay, it's tiny, minuscule, not even worth talking about). But one sexy Santa visit, a plate of chicken parm, and a pair of dino-briefs later - don't ask - and they're celebrating the holidays horizontally. And that mistake leads to another: the pregnant kind. Oops.

Book 3: Man Down (Gunnar and Sadie)
He's been texting the wife he lost, the woman he loved beyond measure . . . Now someone else has answered back.

Each book is completely standalone and features one primary couple, a guaranteed happily-ever-after, and no cliffhangers! Get started with the Rookie Rebels today.