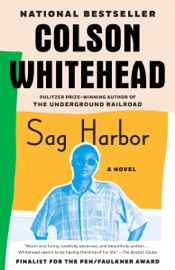 From the two-time Pulitzer Prize-winning author of The Underground Railroad and The Nickel Boys: a hilarious and supremely original novel set in the Hamptons in the 1980s, "a tenderhearted coming-of-age story fused with a sharp look at the intersections of race and class” (The New York Times).

Benji Cooper is one of the few Black students at an elite prep school in Manhattan. But every summer, Benji escapes to the Hamptons, to Sag Harbor, where a small community of Black professionals have built a world of their own.

The summer of ’85 won’t be without its usual trials and tribulations, of course. There will be complicated new handshakes to fumble through and state-of-the-art profanity to master. Benji will be tested by contests big and small, by his misshapen haircut (which seems to have a will of its own), by the New Coke Tragedy, and by his secret Lite FM addiction. But maybe, just maybe, this summer might be one for the ages.